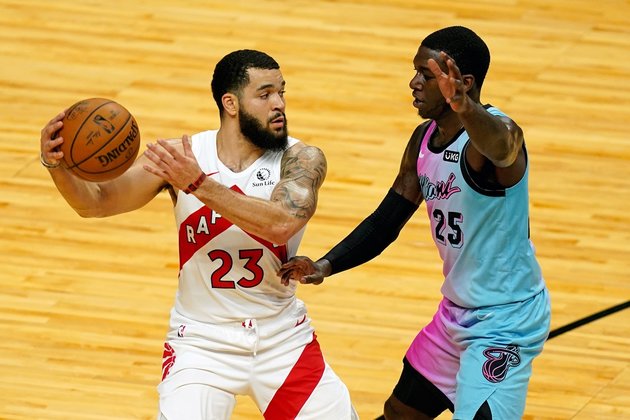 The Detroit Pistons will try to end a three-game losing streak when they visit the Toronto Raptors at Tampa, but instead of playing Tuesday, they have mad been moved back a day to Wednesday.

COVID-19 concerns, that included "positive test results and ongoing contract tracing" among the Raptors, according to the NBA, put a 24-hour pause on the game.

The Pistons have dropped six of their past seven games after their 109-90 loss to the New York Knicks on Sunday.

Meanwhile, the Raptors' game Sunday against the Chicago Bulls at Tampa was postponed because of NBA health and safety protocols.

"Because of positive test results and ongoing contact tracing within the Raptors, the team will not have the league-required eight available players to proceed with the scheduled game against the Bulls," the league said in a release. A lack of available Raptors players also was cited for Tuesday's postponement.

The Raptors defeated the Houston Rockets 122-111 on Friday night at Tampa without coach Nick Nurse, five assistant coaches and forward Pascal Siakam because of health and safety protocols.

Norman Powell had 30 points on Friday to lead the scoring for the Raptors, who have won five of their past seven games.

Assistant coach Sergio Scariolo ran the Raptors from the bench in Nurse's absence.

"Honestly, it didn't feel too much different with the 1,500 games I've coached before," Scariolo said. "I felt that we were prepared getting into the game because everybody made his contribution and this is what it takes in a team sport like basketball."

The 59-year-old Italian is an experienced coach. He has coached Spain's national team in 150 FIBA games, winning the 2019 World Cup, a silver medal at the 2012 London Olympics and a bronze at the 2016 Rio Games, as well as three golds and a bronze at EuroBasket competitions dating to 2009.

"When I first met him, I was like, 'Sergio is a head coach,'" said Kyle Lowry, who had 20 points, 11 rebounds and 10 assists on Friday. "He's the head coach, A-type personality. That's just him. That's who he is. He's very smooth. He's very passionate about the game. He knows what he's talking about."

Lowry has 18 career triple-doubles, 16 with the Raptors.

"(Scariolo is) just really calm," said guard Fred VanVleet, who scored 25 points on Friday. "Very serious, obviously. He's done it at a high level for a long time, so you can't really B.S. him. He really knows the game, he knows his stuff."

As for the Pistons, they were held to 37 points in the first half against the Knicks, a season low.

Jerami Grant led the Pistons with 21 points and grabbed eight rebounds, and Wayne Ellington added 15 points on 4-of-6 shooting from 3-point range.

Grant left the game in the fourth quarter because of a leg injury. Coach Dwane Casey said that it was a mild calf strain.

The Pistons had their largest losing margin Sunday since their 27-point loss to the Golden State Warriors on Jan. 30.

"It's a make-or-miss league and we just didn't make the open looks," Casey said. "They were the aggressor the entire night, offensively, defensively and had us on our heels and I don't think we ever recovered."

Isaiah Stewart was a bright spot for the Pistons against the Knicks. He scored four points but had 10 rebounds in 28 minutes.

The Raptors were 3-0 against the Pistons last season.